4.7.3 Lunar Evidence of Past Solar Activity

The Remarkable Glazed Rock Patches on the Moon.  One of the most amazing discoveries of the Apollo 11 manned landing on the Moon was that small lunar craters measuring between 20 cm and 1.5 meters across frequently contain at their bottoms lumps of soil whose upper surfaces are coated with a glassy glaze (Gold, 1969). The glassy patches that were photographed at close range by Apollo astronauts range in size from 0.5 - 10 mm.  According to Gold (p. 1345):

The glazed areas are clearly concentrated toward the top surfaces of protuberances, although they exist also on some sides.  Points and edges appear to be strongly favored for the glazing process. In some cases, droplets appear to have run down an inclined surface for a few millimeters and congealed there.

Eliminating a variety of possible alternate explanations, such as meteorite impacts, Gold concludes that these features were formed by intense radiative heating of the lunar surface by the Sun. Temperatures at crater bottoms typically being 10 - 20% higher than on flat ground, such regions would have been the first to melt. He points out that this event would have had to have occurred within the last 30,000 years in order to account for the absence of significant micrometeorite erosion. He estimates that the solar luminosity would have had to increase by 100 fold for 10 to 100 seconds in order to produce the observed glazing effects, and suggests that this luminosity increase may have occurred in the form of a very large solar flare or as a nova-like outburst. He proposes that either the Sun spontaneously engages in such outbursts on rare occasions (every few tens of thousands of years) or else something falling into the Sun happened to trigger the proposed eruption, e.g., the infall of a large cometary body having a mass of about 3 X 1021 grams and a diameter of about 100 km.

Gold's conclusion that the Sun has engaged in extremely energetic activity within the last 30,000 years parallels the conclusion that I have reached independently in this study on the basis of an entirely different set of data. As is suggested in Section 3.3.2, about 12,000 - 14,000 years ago the Sun temporarily may have become a T Tauri-like star due to the accretion of nebular material.  Short-period flare-like outbursts lasting on the order of 100 - 104 seconds and having energies of the order of 1034 ergs are typical of T Tauri stars; see Section 3.3.2 (p. 192). However, for the outburst proposed by Gold, a total energy of 1037 ergs (1000 times greater) would be required. Such a large outburst would be more on the scale of a nova than a flare. T Tauri stars are observed to change their luminosity in an erratic manner by 20 fold or more, but it is not certain whether this effect is due to variations in the optical depth of obscuring dust or to variations in the intrinsic output of the star.

Another possibility is that the Moon's surface was heated by solar wind particles, rather than by electromagnetic wave radiation. About half of the energy of a solar flare is normally emitted in the form of solar wind protons. If such a particle blast from a very large solar flare were to become magnetically trapped in the Earth's magnetopause tail, very high particle densities could become temporarily achieved. If then the Moon happened to be transiting through this energetic region, its surface could have become considerably scorched. Alternatively, it is also possible that both the Earth and Moon encountered a region of enhanced solar flare particle density, the remnant of a major prominence or "fireball" thrown out by the Sun. In such a case the interplanetary magnetic field bound up with the particle blast wave could have acted as a magnetic bottle retarding the dispersal of this region of high particle density as it journeyed from the Sun.

Morgan, Laul, Ganapathy, and Anders (1971) have analyzed the glassy coating and crystalline interior of one lunar rock and find that the coating is enriched in a number or rare earth elements and alkali metals including Ir and Au. They conclude that the glass has been contaminated by a mixture of meteoric material with lunar soil. They suggest that the glassy material represents molten material splashed from a nearby meteoritic impact and that it was not produced by in situ melting due to radiative heating, as Gold has suggested.

However, the geochemical results reported by Morgan et al. could be interpreted differently. If at the time of radiative or solar wind heating the surface of the Moon had been covered by a fine deposit of micron and submicron-sized particles of cosmic dust, this material would have become fused into the underlying rock when melting occurred. This scenario is compatible with the proposal made earlier in this study (Chapter 3, Section 3.3.2) that the solar system was filled with unusually high concentrations of cosmic dust at the time of enhanced solar activity. In addition, the results of the glacial ice dust tests (Chapter 12), which indicate high cosmic dust deposition rates at the end of the Wisconsin ice age, also support this interpretation.

The Lunar Record of Past Solar Flare Activity.  Solar flare tracks left in the glassy surfaces of lunar micrometeorite craters provide a record of past solar flare activity. Assuming that the cratering rate has remained relatively constant for the past 2 X 104 years, Zook, Hartung, and Storzer (1977) conclude that solar flare activity must have been about 50 fold higher about 16,000 years ago. The activity curve which they have derived is shown in Figure 4.5. If the cratering rate was higher prior to 10,000 BP, as the Galactic Explosion Hypothesis suggests [dissertation's hypothesis], then the solar flare activity change presented in this diagram would be underestimated. The peak at 16,000 BP would then be expected to increase and shift to a more recent date. Thus this data would be compatible with the solar outburst date of 14,000 calendar years BP (12,000 C-14 years BP) established on the basis of geological evidence; see Part III of dissertation.* 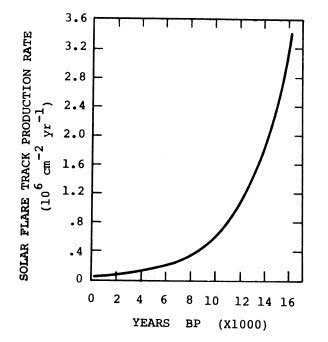 It is significant that the conclusion reached by Zook et al. on the basis of lunar rock studies parallels that which I independently arrived at on the basis of the analysis of glacial ice dust and theoretical considerations regarding the response of the Sun to the accretion of elevated amounts of nebular material. Zook et al. (1977, p. 120) speculate that the elevated solar flare activity around 16,000 BP may somehow have been associated with the retreat of the continental ice sheets at the end of the last glaciation, although they are not able to suggest a mechanism by which terrestrial temperature would correlate with solar flare activity. The GEH suggests such a mechanism, namely the influx of nebular material into the Solar System could have caused terrestrial heating through an interplanetary greenhouse effect and also could have activated the Sun through material accretion; see Section 3.3.2 (pp. 185, 194) and Subsection 3.3.4 (p. 211).

It should be pointed out that the occurrence of a very brief, very intense heating of the lunar and terrestrial environment at the end of the Last Ice Age (either by a radiative outburst or by an outburst of solar wind particles) may be easily tested by conducting a detailed stratigraphic analysis of glacial ice cores. If this scenario is correct, a melt feature should be present in the ice cores discussed in Chapter 8. Such a feature would most easily be distinguished in Antarctic cores, where melt features are normally found to be quite rare. Also, if a major solar outburst had occurred, it would probably have left a signature such as a high nitrate concentration, possibly in association with an enhancement of Be-10 concentration; refer to Section 8.4 (p. 432) and Section 7.2 (p. 392).